I’m not usually one to criticise but I thought the referee got it spectacularly wrong today.

There should have been at least another 3 minutes added time and what about that shove on BWP in the box?

Still, at least we’ve kept the five point gap between us and the Wendies after Huddersfield fought back to draw at Hillsboro’. Shades of Dec 2009 when we faced Millwall?

I was proud to have been able to lead the minutes applause for a true gentleman and Charlton Legend, Peter Croker.

We interviewed his son’s Paul and David for Charlton Live. They spoke so warmly about their father, it really was great to speak to them. They were both saying what a humble man he was.

They brought in clippings from papers and letters from Jimmy Seed to their father. A complete world away from modern football. One thing they did say was how much their father rated Chris Powell.

The cherry on the top was when they produced their fathers FA cup winners medal. Have to say that Terry, Pete and me were like kids in a candy store.

It was an honour to hold that medal.

Oh and the less said about halftime the better. OK? 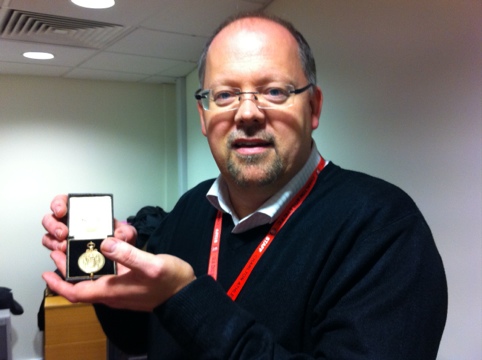