Normally this blog and my general musings are about a certain football team and the lack of a decent radio station to cover said football team. Well not this post.

Sadly I have to report that Morgan Computers are no more. Sold, gone, closed up. It may mean absolutely nothing to you, but you have been touched by them. I kid you not. More of that in a minute.

This was a company that specialised in surplus stock, last years model at bargain prices. Whatever you wanted, they would have something for you.

My very first PC, an old 286 with 128mb of Ram and a 40 MB HDD, came from Morgan some 20 years ago. In fact I bought most of my PC’s from them. Including the one at the Valley that we use to play the music from.

No trip to Tottenham Court Road was complete without the quick nip round the corner to New Oxford Street and Morgan.

Who knows why they sold up. Some are suggesting that it could be down to Ebay. The Website was sold on to another firm and yes it looks the same but it’s not the company that I grew up with and the stuff they are selling, well it’s not really what I want, it doesn’t seem to be that bargain. Funnily enough the testimonials section of the “new” website still refer to the stores.

No more Morgan Flyers randomly arriving through the letterbox, scouring through looking for that magical discount deal. No more will the wife “comment” what are you buying now? If only she knew!

I’m going to miss them.

Well the blog is certainly going to live up to it’s name today as all the predictions point towards a deluge from the skies.

Hopefully a win against MK Dons today will see spirits rise and lift the general cloud of doom that’s been hanging over our heads for the past two weeks following the defeat by Carlisle.

Our opponents today bring out many mixed emotions for Charlton fans. The move from South London to Buckinghamshire still divides opinion. Some will never forgive, some are prepared to accept and hand out an olive branch. I don’t think it will ever be sorted until AFC gain a place in the league. That, in my opinion, will happen very soon.

So prediction today, well with Mini Sodje signing for us today and Richardson back in defence I have a feeling we will win. It’ll be close but I’m going for a victory by a single goal.

Right anyone got any waterproof they can lend me, possibly a Laminator too?

Too depressed, will put something up in the cold light of the morning.

Anyway, for all Charlton lifers, here’s a grainy photo of Large and Golfie. They passed us in the car on the way home and didn’t look happy! Don’t blame them. 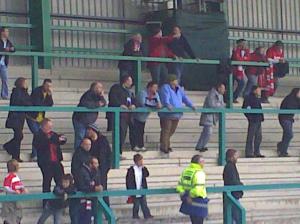 So lucky to be level here. Two clear cut chances to score, Victoria will be kicking themselves that they are not in the lead.

Charlton look disorganised and have no punch up front.

Things can only get better?

Lovely pitch it has to be said, flat as a billiard table. Outside behind the goal and it’s a very basic terrace, just a step!

No news on the teams yet. very tinny tannoy with an interesting selection of music.

3Blokes reckons the pitch will help us as it’s so good.

Wave if you see us on the TV! 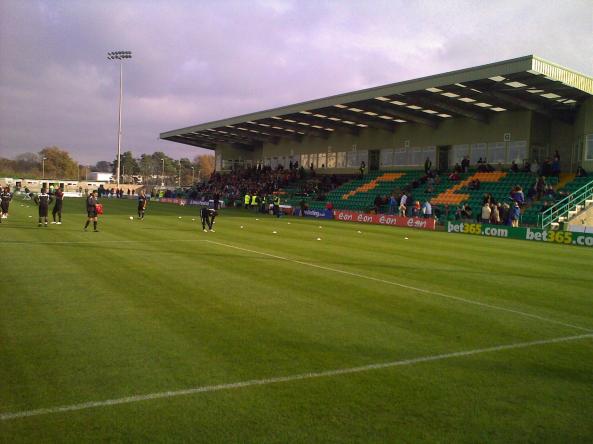 We’ve arrived and so have the team. Few Charlton here already, clubhouse packed so will try and get a beer.

Been made welcome already. Let’s hope we’re smiling at 3.30. 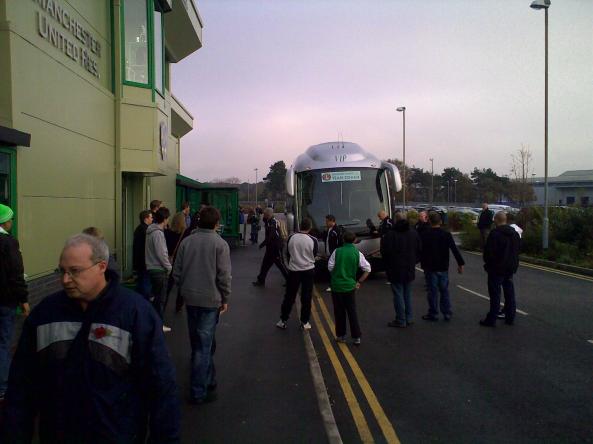 130 miles to go, enjoying a coffee. Traffic is clear at the moment. No sign of the coaches.

Keep on passing a Result Scenic with a Charlton badge in the back, how does he keep getting in front of me. Johnny Mc (3Blokes to you Lifers) will try and take a picture of them.

Right back to the coffee!

Just testing out the wonders of mobile blogging. This probably won’t work, but hey it’s worth a try.

For the record, this was taken the Legoland store at Bluewater. The boys refused to be photographed with them.

Thought it was about time I updated my blog.

Gone for WordPress rather than Blogger and a subtle change of name.

Will be updating the site as soon as I work out how the bloody hell I add things, i.e. music, video’s etc.

So, a lot’s happened in the last year, since my last post on the old blog. We’ve had Zabeel, relegation, death of a radio station. I’ve discovered Twitter and tweet far too much for my own good (@bigdl if you’re interested). Given up on the old Cattlewagons and speed up to town on the Javelin. So here’s hoping that it’s not a year before I update again!

I’ve gone over to the dark side and discovered Apple. Swore that I would never buy an Ipod, but got hooked by the Touch. It is a thing of wonder and keeps my journeys pretty sane. Managed to get hold of an old Powermac G4 and have fun in trying to work out how to use OS X. It is better than Vista, but that’s not hard.

Musically I’ve fallen back in love with Marillion. For some reason I just couldn’t get into the last album of theirs that I bought way back in the 90’s. Don’t know why but I rippd it into the Ipod and have never looked back since.

My kids have got older and wiser, wiser in the fact that Dad has money, not a lot it must be said, and money buys things and they like that.

We’re (Mrs. Big Dave  and myself) having the fun of changing schools at the moment, making the choice for our son. One that will dictate his future. It has to be said that there isn’t much choice in this part of the world if you fail your 11+. So it was a good job that Big Dl Jnr passed with flying colours, well done Son We’re both very proud of you.

Pity the poor kids who have to go to the other schools. Nice new buildings maybe. But that doesn’t make up for decent education. Blimey I’m almost going political, that’ll never do.

So there you go, a brief summary of what I’ve been up to in the last year. Really really exciting, yes I know!

Who knows what the next 12 months will bring? One thing we all hope is that it brings Promotion in May (or Earlier, we’d like that!)